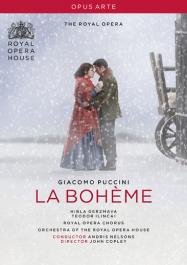 John Copley's enduring production of one of the most famously melodious and popular of all operas is a classic of the Royal Opera repertory. With historically accurate designs by Julia Trevelyan Oman and an excellent cast headed by Hibla Gerzmava and Teodor Ilincai, this 2009 revival, in which conductor Andris Nelsons makes a distinguished Royal Opera House debut, does full justice to Puccinis masterpiece.

"In every sense this Bohème glows. John Copleys legendary staging with sets by Julia Trevelyan Oman, first seen in 1972, is renowned for its authenticity and detail, both architectural and human. Full of telling little touches - the artist Marcellos Act II girlfriend is his Act IV model - they bring 19th-century Pariss bustle alive as effectively as any BBC classic...This latest incarnation, betraying no trace of staleness, has no such stellar names - yet! -except perhaps Andris Nelsons, boisterous where precursor Lamberto Gardelli was nostalgic. Instead it offers a vibrant new ensemble, improbably youthful and good-looking." (BBC Music Magazine)

"This release is a delight, a relay from Covent Garden which was, as far as Im aware, broadcast live into cinemas last December. It features their current production which has been doing the rounds since the early 1970s, here revived by the original director himself. Copleys production is traditional and beautiful, its chief concern being to tell the story directly. In December 2009 some criticised it for looking a little worn and shabby. Dont believe a word of it! In the close-up of the screen it looks neat, fresh and as good as new, every piece of furniture and inch of set design serving the purpose of the drama nicely...Opus Artes usual high standards are maintained in the presentation and title menus, and there are brief interviews with Nelsons and Copley about the production. There are many Bohèmes available on DVD, but this one is as recommendable as any, and it feels good to be able to say this about such a home-grown product. Covent Garden have kept this production for so long because it works so well, and I think that anyone with this DVD in their collection would feel the same way." (Musicweb International)

"Gerzmava is clear in tone and clean in style, the Rodolfo (Teodor Ilincai) light and unforced but wanting richness. All act naturally and well, Jacques Imbrailo (the Schaunard) with panache." (Gramophone)