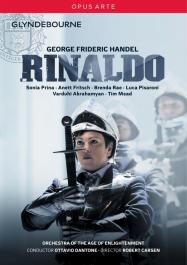 Glyndebourne continues to celebrate the genius of Handel with its first staging of Rinaldo, the work with which he made his sensational London debut - and the first Italian opera specifically created for the British stage. It is given a contemporary new twist through the eyes of Director Robert Carsen, who made his Festival debut with Lincoronazione di Poppea in 2008. Early music specialist Ottavio Dantone, Music Director of the acclaimed Italian period ensemble Accademia Bizantina conducts the Orchestra of the Age of Enlightenment. The cast is headed by Sonia Prina in the title-role of the heroic crusader, with Anett Fritsch as his beloved Almirena, Brenda Rae as the seductive Saracen sorceress Armida, and Luca Pisaroni (last summers Leporello) as her duplicitous ally Argante, the King of Jerusalem.

"A splendid cast and the Orchestra of the Age of Enlightenment, conducted with a firm hand by Ottavio Dantone, kept ones spirits up. Sonia Prinas mezzo-soprano excelled." (The Daily Telegraph)

"What is here is some exhilarating music-making, both vocal and instrumental." (International Record Review)