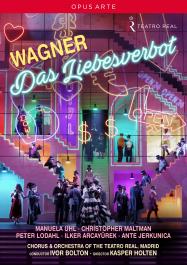 "The production by Kasper Holten is excellent: fun, imaginative, lively, and beautifully suited to a comic opera. The sets consist of a house with multiple rooms and stairs which, based upon lighting and the imagination, serves as the whorehouse El Corso, a convent, and even a prison. The colourful costumes respond perfectly to the demands of this opera, or rather operetta (and very near to a musical). To this must be added a superb job of lighting and excellent choreography. Mr. Holten’s direction is outstanding from beginning to end, narrating the story effectively and bringing the action up to modern times. Ivor Bolton was on the podium with the first cast, and his reading was well-suited to the work." (Seen and Heard International)