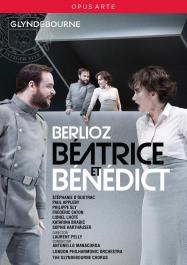 Through the eye of French director Laurent Pelly this expression of Berlioz’s undying admiration for the Bard — his adaptation of Much Ado about Nothing as an opéra comique — becomes ‘an elegant treatise on love and musicdesigned in shades of grey with 50s-era costumes’ (Sunday Express ★★★★). Housed by designer Barbara de Limburgin a series of oversized boxes, it’s ‘terribly chic, terribly pretty’ (The Spectator). Soaring over the ‘warmly gracefulplaying of the London Philharmonic’, Paul Appleby sings ‘attractively’ as Bénédict and Stéphanie d’Oustrac ‘makes amarvellously wiry and fiery Béatrice, singing with charm and acting with gusto’ (The Telegraph).

"… delivered with sumptuous assurance..." (The Times)