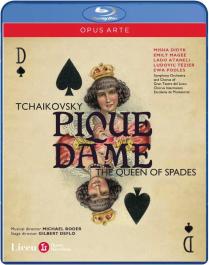 Obsessive in gambling and in love, the soldier Hermann is the protagonist of Tchaikovsky's Pique Dame, based on a story by Pushkin. He is smitten with the aristocratic Lisa and fixated on learning the winning secret of the three cards from her grandmother, the Countess, played by iconic contralto Ewa Podles. This opulent production from Barcelona's Liceu captures St Petersburg in the era of Catherine the Great, while the houses Music Director Michael Boden conducts a large and impressive cast.

"It gives us a thoroughly traditional production from the Liceu but it works because it tells the story so compellingly and because the singing and playing is excellent from everyone...Watching this DVD reawakened me to the dramatic and musical treasures of what must surely be Tchaikovskys greatest opera (with apologies to Onegin fans). This is an ideal way to introduce the opera to someone for the first time, and a great way for established Tchaikovskians to remind themselves just how great it is." (Musicweb International)