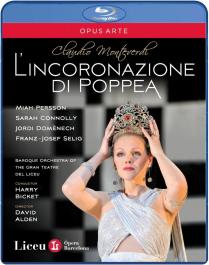 Love conquers all - ruthlessly and irresistibly - as Emperor Nero and his mistress Poppea remove the obstacles to their union. At Barcelona's Gran Teatre del Liceu David Aldens visually sumptuous production, with its suggestions of a giant game of chess, puts the operas potent blend of sex and politics in a context that sets ancient against modern just as the action juxtaposes scurrilous comedy and stark drama. Monteverdi's magnificent score, meanwhile, accommodates intrigue, wit, nobility, tragedy and sensuality, and, led by the intense Sarah Connolly and the delectable Miah Persson, the cast brings both drama and music startlingly to life.

"It is difficult to imagine a more credible and convincing Poppea than the Swedish soprano Miah Persson. Her beauty, outstanding figure, her acting abilities and her beautiful voice, together with her great expressiveness, make her the Poppea of ones dreams." (Musicweb International)