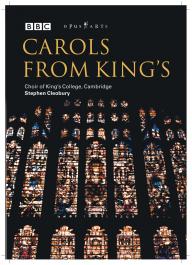 "... one almost feels privileged to watch...if you have a 5.1 surround system, you can enjoy this DVD in true surround sound mix - guaranteed to get you in the mood for Christmas." (Classic FM)

"If its still old tradition that counts, at least the advent of DVD has introduced a fresh slant to the old favoritesCarols from Kings, which not only features excellent sound and visual coverage of the December 2000 Festival of Nine Lessons and Carols, but also includes historic footage of the first ever televised service in 1954, and a light-hearted chat among the ancient chapels last three directors." (CNN )

"... the selection of popular church anthems from the late 19th-/ early 20th-century Anglican revival, the impressive full-length shots of King's College chapel, taking in the opulent fan vaulting and expanses of stained glass, are matched by an atmospheric sonic ambience that evocatively captures the listening experience in a large church." (BBC Music Magazine)

Historic 45 minute recording - The first-ever televised service from Kings, with the 1954 Kings Choir conducted by the legendary Boris Ord.Newly-filmed 30-minute readings and conversation between Stephen Cleobury and former Kings Music Directors; Sir Philip Ledger and Sir David Willcocks (filmed in 2001)with subtitles in French and German.Illustrated booklet with historical notes and biographies in English, French and German plus carol texts from the 2000 service.