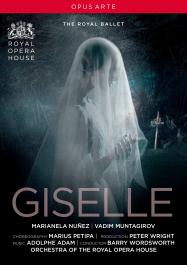 The quintessential Romantic ballet, Giselle has remained a cornerstone of the classical repertory since itspremiere in 1841. Peter Wright’s landmark production for The Royal Ballet does full justice to the work’semotional and atmospheric power, with John Macfarlane’s designs beautifully capturing the contrast betweenthe human and supernatural worlds. Giselle is one of the most challenging and demanding roles in therepertory and has always been a showcase for exceptional ballerinas. With Marianela Nuñez’s ‘absolutemastery’ of the choreography, she and her Albrecht, Vadim Muntagirov, are ‘technically thrilling’ (Guardian).

"If the acting is superb, it’s given real authority by the dancing. Muntagirov and Nuñez are technically thrilling; she, at her finest moments, can combine an absolute mastery of the choreography, with the illusion that she’s dancing it for the first time." (The Guardian ★★★★)

"Marianela Nuñez poignantly merged formidable technique and dramatic interpretation in a radiant portrait of a fragile – somewhat naïve – young girl with delicate feminine grace but also a streak of fatalism. This Giselle expected happiness and it made it all the more pitiable when she discovered she had been deceived. Hers was a performance of haunting – and totally captivating – otherworldliness. Once again it was an exceptional ensemble performance with everyone knowing why they were on stage and totally ‘switched on’ and in character, whether it was as a peasant in the furthest background or as a Wili." (Seen and Heard International)

"Peter Wright’s version of Giselle is one of the jewels in the Royal Ballet’s crown. Created in 1985 (after the 1841 original), but further polished by both him and designer Jonathan Macfarlane in 2011, it looks ravishing and lets the story unfold with complete clarity. Add Adoplhe Adam’s charming score, exquisite choreography and – in Giselle herself – one of the greatest ballerina roles of all, and you have, in short, a production to cherish." (The Daily Telegraph)