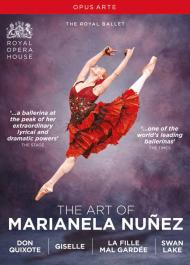 The Art of Marianela Nuñez (The Royal Ballet)

​In her twenty years with The Royal Ballet, Argentine dancer Marianela Nuñezhas excelled in iconic ballet classics, Company heritage works and moderncreations. A Company Principal for 16 years, she has performed all the leadingroles in the classical, dramatic and contemporary repertory. This collection showcases her exceptional mastery in four quintessential roles. In Swan Lake,she brings to life the beautifully tragic Odette and her rival Odile. She perfectly portrays the young lover Lise in La Fille mal gardée, and brings bravura and vivacity to the role of Kitri in Carlos Acosta’s production of the classical DonQuixote. She is transcendent as Giselle, one of the most challenging anddemanding roles in the repertory. With peerless technical skill and compellingperformances by the whole Company, this collection celebrates anexceptional dancer in her prime.

"... a jovial and entertaining showcase for classical dancing at its most demanding and exuberant. One of the pleasures of this ballet is to be tickled by Minkus's infectiously melodious score... Marianela Nuñez and Acosta delivered sparky, engaging performances" (The Times - Don Quixote)

"Nuñez’s final variation in Act I was a thing of joy as she unleashed her inner ferocity and let rip. Acosta’s partnering, his care of Nuñez, was also a pleasure to watch ..." (The Arts Desk - Don Quixote)

"If the acting is superb, it’s given real authority by the dancing. Muntagirov and Nuñez are technically thrilling; she, at her finest moments, can combine an absolute mastery of the choreography, with the illusion that she’s dancing it for the first time." (The Guardian ★★★★ - Giselle)

"Marianela Nuñez poignantly merged formidable technique and dramatic interpretation in a radiant portrait of a fragile – somewhat naïve – young girl with delicate feminine grace but also a streak of fatalism. This Giselle expected happiness and it made it all the more pitiable when she discovered she had been deceived. Hers was a performance of haunting – and totally captivating – otherworldliness." (Seen and Heard International - Giselle)

"Anthony Dowell’s production...offers the ultimate classical experience, with the sights and sounds of a proud 19th century tradition running at full throttle. Fancy a romantic tragedy in a tutu? Then this is the ballet for you...The production as a whole is beautifully formed and dramatically convincing...And praise, too, for the corps, who made us feel the sorrow and anger of the swans’ collective misfortune" (The Times - Swan Lake)