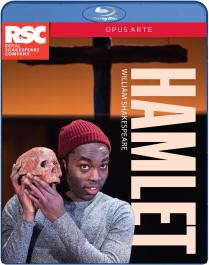 Hamlet has the world at his feet. Young, wealthy and living a hedonistic life studying abroad. Then word reaches him that his father is dead. Returning home he finds his world is utterly changed, his certainties smashed and his home a foreign land. Struggling to understand his place in a new world order he faces a stark choice. Submit, or rage against the injustice of his new reality. Simon Godwin (The Two Gentlemen of Verona released on OA1168D / OABD7167D) directs Paapa Essiedu as Hamlet in Shakespeare's searing tragedy. As relevant today as when it was written, Hamlet confronts each of us with the mirror of our own mortality in an imperfect world.

"It is an utterly engaging performance by Paapa Essiedu." (The Times ★★★★)

"... the percussive music of Sola Akingbola makes a vital contribution to a production that makes you feel, even if you are seeing Hamlet for the 50th time, that you are experiencing it anew." (The Guardian ★★★★)

"He’s got it. Paapa Essiedu has that quality that makes you sit up and pay attention. His Hamlet is mischievous and flirtatious, charismatic and sarcastic. He’s kind of obnoxious at times, true, but he also conveys the character’s pain – the mask falls and suddenly there are whole stanzas in his eyes. Essiedu’s Hamlet is a fresh prince, confident, cocky, compelling, hopping from foot to foot, fizzing like an aerosol can. ... an arresting, accessible and entertaining production, with a shooting star of a central performance." (The Stage ★★★★)

"This is a landmark production: Paapa Essiedu is the first black actor to play Hamlet for the RSC in its 55-year history. He is charismatic, capricious and compelling: an impulsive, arresting presence at the heart of a production that reframes the dilemmas in the play by setting it in an unnamed African state." (The Financial Times)

"... the performances are terrific, though, with Natalie Simpson handing out strands of her ripped -out hair instead of herbs as a piercingly distraught Ophelia and Essiedu the most compelling youthful Hamlet since Ben Whishaw." (The Independent ★★★★)