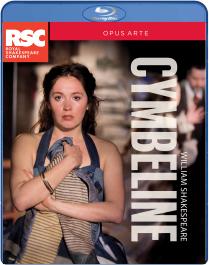 ​Britain is in crisis. Alienated, insular and on the brink of disaster. Can it besaved?An ineffectual Queen Cymbeline rules over a divided dystopian Britain.Consumed with grief at the death of two of her children, Cymbeline’sjudgement is clouded. When Innogen, the only living heir, marries hersweetheart Posthumus in secret, an enraged Cymbeline banishes him.Behind the throne, a power-hungry figure plots to seize power bymurdering them both.In exile Innogen's husband is tricked into believing she has beenunfaithful to him and in an act of impulsive jealousy begins a scheme to have her murdered. Warned of the danger, Innogen runs away from court in disguise and begins a journey fraught with danger that will eventually reunite Cymbeline with a long-lost heir and reconcile the young lovers.

"It’s the strength of the performances that really make this production, and the cast's ability to draw out the underlying humour in every situation goes a long way to negating the flaws in the original text. Oliver Johnstone is brilliant as the suave, silver-tongued Iachimo, strutting about the stage and wearing all of his sexual potency on his sleeve. Some of the best scenes come when he focuses his scheming charm on the faithful Innogen, skilfully played by Bethan Cullinane. Marcus Griffith also manages to find much comic absurdity in the overblown ego of the otherwise contemptible Cloten. But these are compelling performances among many. It may not be one of the best-loved of the Bard’s canon, but this production is full of passion and humour, and is riotous fun." (The Radio Times)

"Still handles the comedy very well, though, and draws some lovely performances from her cast. Bethan Cullinane makes a brave, determined, sweetly funny Innogen: moving in her silent shock at her husband’s accusation of infidelity. Marcus Griffiths is a wonderfully bombastic and ridiculous Cloten and his attempts to woo Innogen through song are hilarious." (The Financial Times)

"Comes straight from the heart ... It’s unafraid of emotion and boasts fine performances ... This is an evening that belongs to the Director ... " (The Guardian)