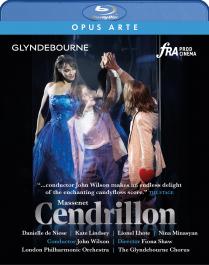 With its combination of enchanting love story and broad, burlesque comedy, Cendrillon is one of the great operatic fairy tales – a Cinderella that looks back to Charles Perrault’s original story in all its richness and ambiguity. Massenet’s sensuous Belle Epoque fairy tale is gilded with lavish orchestral textures and glittering vocal writing, drawing on everything from baroque dances to Wagner-inspired chromaticism to bring its story to colourful life, conjuring a world of infinite musical and emotional variety.

"De Niese and Lindsey match each other perfectly. As Cinderella’s Fairy Godmother, Armenian soprano Nina Minasyan delivers dozens of high notes with elfin expertise. Agnes Zwierko enacts Cinderella’s selfish stepmother with a fine sense of parody, though she’s a bit flat vocally, while Lionel Lhote is impeccable as Cinderella’s ineffectual father, Pandolfe. There’s top-quality playing from the London Philharmonic Orchestra in the pit, while conductor John Wilson makes an endless delight of the enchanting candyfloss score; and there’s enough magic and fairy dust in the show’s visuals and its overall execution to keep the children in us all happy ever after." (The Stage)