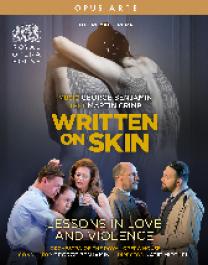 Benjamin: Written on Skin / Lessons in Love and Violence (The Royal Opera)

Written on Skin has been hailed as ‘magic and irresistible … the best opera written over the last twenty years’ (Le Monde). It tells the story of a cruel and powerful Protector who asks a mysterious Boy to create an illuminated book to celebrate his wealth and family. He invites the Boy into his home, little realizing that this will lead to a journey of startling, joyful and ultimately tragic self-discovery for his oppressed and much younger wife Agnès.

Drawing on the real-life relationship between Edward II and Piers Gaveston, Lessons in Love and Violence explores how personal relationships can have fatal political consequences. The King lives in a close but uneasy relationship with his wife Isabel, their two children and his lover Gaveston. When the King banishes his military advisor Mortimer, he sets off a chain of devastating events.

The composer conducts two superb international casts, including soprano Barbara Hannigan, who appears in the leading roles of Agnès and Isabel.

"Hailled as a 'triumph' at its premiere in Aix-en-Provence in 2012, 'Written on Skin' has quickly establsihed itself as one of the essential 21st-century operas." (Gramphone - Winner of the Contemporary Award - Gramophone Awards 2014 (Written on Skin))

"Although Marlowe’s play was in Crimp’s mind when he began to create his operatic text, the result is an independent drama that Mortimer’s smart and fluent designs, based around an adaptable unit set, place visually in the here-and-now. While there’s no disguising that the central character is the English monarch forced to abdicate and then murdered in 1327, he is referred to only as the King (a finely detailed performance from Stephane Degout), while his son and successor Edward III is initially the Boy and later the Young King (sympathetically realised by Samuel Boden). Most of the other historical figures – Edward’s wife Isabel (sung with immaculate focus by Barbara Hannigan), his disloyal, authoritarian henchman Mortimer (convincingly repellent in Peter Hoare’s interpretation), and his lover Gaveston (a subtly ambivalent portrayal from Gyula Orendt), retain theirs. Meanwhile, in a silent, unnamed part as Edward’s daughter – referred to as Young Girl – Ocean Barrington-Cook retains a watchful and increasingly compelling presence. The focus of Crimp’s resonant libretto is the collision between love and power, articulated in Mortimer’s anger at Edward’s relationship with Gaveston, which causes him to set in motion the king’s removal; in Katie Mitchell’s disciplined staging not only do we see Edward and Gaveston destroyed, but also how Edward’s children in turn learn lessons in violence. Crimp knows how to leave room for music to amplify his points – which Benjamin’s fascinating score does with boundless technical skill and unceasing eloquence. The composer conducts an outstanding performance." (The Stage ★★★★★ (Lessons in Love and Violence))