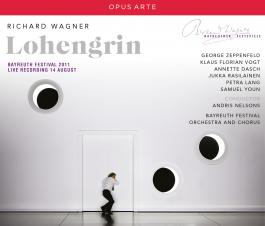 ​Lohengrin is staged by the enfant terrible Hans Neuenfels, and offers a thought-provoking production of brilliant visual clarity. The performanceby Klaus Florian Vogt in the title role is staggering and impressive. Thereis beauty and purity in his voice, but in this role in particular, one truly senses something unheimlich, other-worldly, which fits superlatively bothwith work and production. Conductor Andris Nelsons brings out the best in the festival chorus and orchestra. It is a Lohengrin one does not easily forget and puts Bayreuth back in the vanguard of Wagner interpretation.

"Klaus Florian Vogthas been singing the role of Lohengrin for 10 years, but he never before sang it so painfully truthful, so beautiful and pleadingly, powerfully and inspired. Vogt is the miracle of this production." (www.stuttgarter-zeitung.de)

"Post-Wolfgang Wagner Bayreuth has its critics but this Lohengrin - and the Stefan Herheim 2008 Parsifal that will be broadcast and recorded this summer - shows it at its very best. I strongly commend this DVD to those who want to know what is current at Bayreuth...or to those who have seen it in the Festspielhaus or on TV and want to relive it." (Musicweb International)