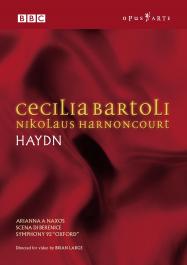 Cecilia Bartoli in sensational form for a landmark performance of music by Haydn with Nikolaus Harnoncourt and his Concentus Musicus Wien, Filmed at the Styriarte Festival, Austria in July 2001. Directed by Brian Large.

"... its an emotional edginess that makes Bartoli's performance of the cantata Arianna a Naxos so remarkable, an artist running to embrace danger you might say...The concert begins with Harnoncourt leading his own Vienna Concentus Music through a compelling... performance of Haydn's Oxford Symphony. As ever, it's orchestral balance and the carefully judged dynamics that make a Harnoncourt performance so gripping. The hushed introduction to the opening movement is as tightly coiled as a spring, before it's ambushed by the whole orchestra. It's a delight to watch Harnoncourt working with his own players..." (International Record Review)

'Styriarte: Portrait of a Festival' - Short film on the renowned music festival founded by Harnoncourt in his home town of Graz.'In Rehearsal' - Cecilia Bartoli and Nikolaus Harnoncourt discuss the music of Haydn, and work on performances in rehearsal.