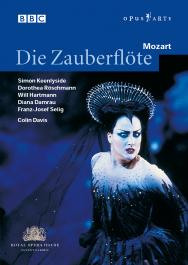 "This productions slow journey from darkness into the lightworks well on the small screen, not least thanks to high-definition camera work and Sue Judds inspired direction for television. The real magic, though, is supplied by the onstage cast...In Dorothea Röschmanns hands, Pamina emerges not so much a powerless victim of Fate but more as a passionate woman prepared to suffer in the nameof love. Her natural command of the stage is sagely employed by McVicar...Diana Damraus supremely sung Queen of the Night oozes class, while Simon Keenlysides profoundly human, touchingly sympathetic view of Papageno deserves an Olivier Award." (Classic FM)

"...a mellow warmth that was deeply satisfying. Simon Keenlyside...a triumph as quite the most engaging Papageno I have ever encountered...With an exceptional Queen of the Night, Diana Damrou, this is an evening no Mozart lover should miss..." (The Mail on Sunday)

BBC feature looks behind the scenes at this production. Conductor Sir Colin Davis talks about Die Zauberflöte. Illustrated synopsis of the opera. Illustrated booklet with biographies in English, French and Spanish.