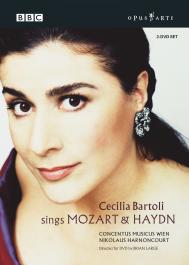 One of the greatest artists of her generation, Cecilia Bartoli is at the height of her powers. With thrilling performances of Mozart and Haydn arias, recorded live in concert, this double disc set also includes symphonic performances from Nikolaus Harnoncourt and his Concentus Musicus Wien.

"Superb - a masterclass in the vocal arts, how to conduct Mozart and how to direct a film of the occasion...director Brian Large captures a great singer at the height of her powers guided by the inspirational Harnoncourt. Bartoli sings five arias in her inimitable way followed by Harnoncourt's illuminating performance of the 'Prague' Symphony. Add to this two neat features on how the concert was recorded and prepared, plus a superb booklet by Misha Donat, and you have a very classy package indeed." (Classic FM)

"... its an emotional edginess that makes Bartoli's performance of the cantata Arianna a Naxos so remarkable, an artist running to embrace danger you might say...The concert begins with Harnoncourt leading his own Vienna Concentus Music through a compelling... performance of Haydn's Oxford Symphony. As ever, it's orchestral balance and the carefully judged dynamics that make a Harnoncourt performance so gripping. The hushed introduction to the opening movement is as tightly coiled as a spring, before it's ambushed by the whole orchestra. It's a delight to watch Harnoncourt working with his own players..." (International Record Review)

"Bartoli is on marvellous form. Her fabulous gifts as a Mozartian are too widely admired to need underlining; but her command of these somewhat neglected Mozart arias  each one a full-scale operatic characterisation concentrated into a short space -has obviously been informed and enriched by her recent investigations into rare Vivaldi and Gluck opera seria." (BBC Music Magazine)