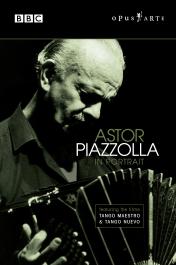 Exploring Piazzolla's vibrant musical influence around the world, this DVD charts the events of his turbulent, complicated personal and professional life through candid and revealing interviews with Piazzolla himself, his family, friends and the great Argentinian musicians who performed with him. This extended DVD version of Mike Dibb's new film Tango Maestro includes rare and wonderful archive sequences spanning 30 years of filmed performances by Piazzolla's own groups with contributions from other virtuoso performers drawn to his music, including Daniel Barenboim, Yo-Yo Ma, jazz vibraphonist Gary Burton, the Kronos Quartet, The Gotan Project, the Tango Pasión dance company, and Astor's close friend Richard Galliano.

"If you know only the music, you will be in for a shock from this absorbing compendium. The shock is twofold: that the vigorous, striking figure seen playing bandoneon in his final recorded studio concert should shortly be felled by a stroke, and that the creator of that searching, emotionally generous  all right, sometimes contrived and depressing  music left a legacy of intense personal exasperation. Such it ever was, perhaps, with driven artists." (BBC Music Magazine)