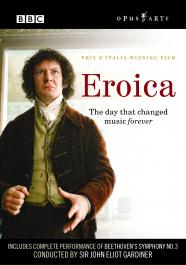 By the time the first public performance of Beethoven's Symphony No.3 (Eroica) took place in Vienna in 1805, a privileged few had already heard the work at a private play-through at the Lobkowitz Palace in June 1804. Nick Dear's award-winning period drama, starring Ian Hart as Beethoven, brings to life the momentous day that prompted Haydn to remark everything is different from today. Filmed in 2003.

"You could not hope for a stronger cast." (The Times)

"A clever and beautifully made dramatisation." (The Sunday Times)

"This was thrilling stuff, as exciting visually as it was aurally." (The Sunday Telegraph)

"Ian Hart is brilliant as Beethoven, a volatile, magnetic figure of genius and uncouth charmnot to be missed." (The Daily Mail)

"They use what we know of the people and places concerned to invent a plausible narrative of politics, love and anger that, most importantly, centres on the music.In fact the domestic scale of the setting is a powerful reminder of the work's vast reach and capacity to shock." (The Gramophone)

Performance Option: Beethoven - Symphony No. 3 in E flat, Opus 55, Eroica Sir John Eliot Gardiner's outstanding surround sound recording of Eroica, made with the Orchestre Révolutionnaire et Romantique exclusively for this film in the Eroicasaal in Vienna, is available to view as a stand-alone music performance feature.