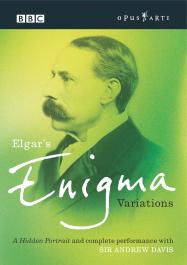 "Sir Andrew Davis's fine performance of the Enigma Variations, with Nimrod hushed, slow and steady, was recorded in the atmospheric surroundings of Worcester Cathedral, where Elgar said everyone should hear his music. Davis introduces a highly enjoyable documentary about the work and 'the friends pictured within'. In the documentary he suggests that each variation, as well as reflecting the character of a particular friend, reveals much about Elgar himself, 'like an actor playing many roles'." (The Penguin Guide)