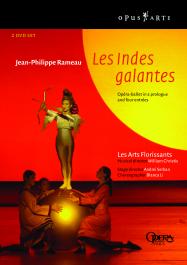 "A sparkling Baroque opera...a vibrant and spectacular work on a grand scale" (Artsworld)

"Described as an Opera-Ballet in four Acts, Les Indes Galantes was Rameau's biggest stage success in his own lifetime, and one can understand why from this spectacular production, staged at the Paris Opéra in 2004. The director, Andrei Serban, presents the piece with the sort of lavish effects and movement that would have delighted 18th-century audiences...Outstanding among the soloists are Nathan Berg as Huascar...Anna Maria Panzarella as Emilie and Paul Agnew as Valere, with Joao Fernandez memorably in drag as Bellone. The final curtain brings an exuberant encore after the credits, with Christie hilariously joining in the dance." (The Penguin Guide)

"The production, designs and choreography are an absolute joy. The singers include Paul Agnew as Valère, whose lively 'Hâtez-vous de vous embarquer' bears a startling resemblance to 'Scacciata dal suo nido' from Handel's Rodelinda of 10 years earlier. Nathan Berg rages eloquently as the villainous Huascar in 'Les Incas'." (Gramophone)

"As the plot is a pastiche of several stories, the visual style of the production seems to be a synthesis of infinite influences and ideas. Literal, representational styles are mixed with abstract elements. The effect is ephemeral and dream-like...This DVD set is remarkable in all respects. It is a must-have for opera lovers as well as Baroque music enthusiasts." (Musicweb International)