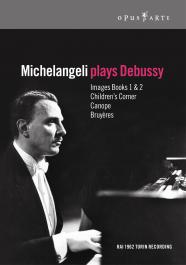 The legendary Italian pianist Arturo Benedetti Michelangeli (1920 - 1995), playing at the height of his powers, performs some of Debussys most sensuous and arresting music for piano, in the famously rare 1962 RAI television recording, newly restored and re-mastered for this release. Michelangelis fine control and perfect clarity - always present in his playing - have positioned him among the most outstanding recording artists of any generation. "His fingers can no more hit a wrong note or smudge a passage than a bullet can be veered off course once it has been fired..." (Music critic Harold Schonberg)

"This recital was filmed and recorded by RAI at Turin in 1962 and is black-and-white. The playing is anything but. Michelangeli plays with an amazingly wide range of colour and refinement of dynamics and touch." (The Penguin Guide)