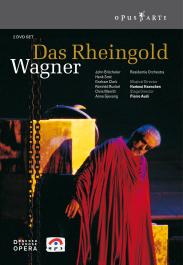 Richard Wagner's tetralogy Der Ring des Nibelungen, in which Power and Love are presented as mutually exclusive ideas, is always a huge challenge for any opera house. Das Rheingold is the opening of this extraordinary production of The Ring from Het Muziektheater Amsterdam, with the orchestra taking its place both in the pit and on the astonishing stage. The fantastic stage direction by Pierre Audi succeeds in forging a profound unity combining the lyrical, mythical and philosophical qualities of Wagners work. Breathtaking sets by George Tsypin, superb costumes by Oscar-winner Eiko Ishioka and the passionate performances of the soloists and Residentie Orchestra under the inspired guest conductor Hartmut Haenchen all contribute to an intense total experience that will leave a permanent impression. This production of The Ring of the Nibelungen is based on the new collected works of Richard Wagner.

"Amsterdams new Ring has begun very promisingly: the crucial architecture is already in place." (The Independent)

"In the timeless archaic costumes by Eiko Ishioka most of the cast reach great heights, especially Wagner specialists like Reinhild Runkel and Graham Clark. Henk Smit is an Alberich with a lot of dramatic power. An exciting start to a Ring with which De Nederlandse Opera will draw international attention once again." (De Telegraaf)

Cast Gallery and Synopsis. 'The Ring Forged' - a documentary introduction to Wagners Ring from Het Muziektheater Amsterdam, including interviews with Hartmut Haenchen, Pierre Audi and the principal cast.