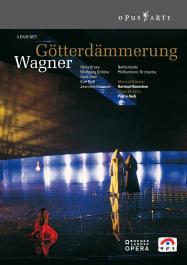 In the fourth and final part of the epic cycle, Der Ring des Nibelungen, the treachery and betrayal which leads to Siegfrieds death also heralds the downfall of the Gods and the return of the gold to the Rhine. This stunning production of The Ring from Het Muziektheater Amsterdam blends the lyrical, mythical and philosophical qualities of Wagners work into a profound unity. Pierre Audis stage direction is inspired and amazing sets by George Tsypin and wonderful costumes by Oscar-winning Eiko Ishioka complement singing and playing of great intensity from the cast and the Netherlands Philharmonic Orchestra under Hartmut Haenchens visionary musical direction. This is a Ring to remember. This production of The Ring of the Nibelung is based on the new Complete Edition of the works of Richard Wagner.

"It is breathtaking to experience how well the technical and spatial possibilities of Het Muziektheater are being used; and even more overwhelming to see the focus on the individual in all this excitement. Het Muziektheater had a premiere without any equal" (Het Financieële Dagblad)