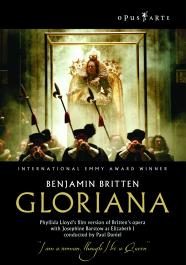 Phyllida Lloyd's acclaimed adaptation for film of the operathat Benjamin Britten wrote for the celebrations of the Queen's coronation in 1953, based on the Opera North revival of a work now recognised to be one of the composer's great achievements.Paul Daniel conducts the English Northern Sinfonia, with a cast inspired by electrifying performances from Josephine Barstow and Tom Randall as Elizabeth I and Essex.

"an unforgettable portrayal of Gloriana, imperious, fickle, dangerous, noble and in the great final scene when she reviews her life, devastatingly moving. This is a performance to class with Callass Tosca in its total believability." (The Sunday Telegraph)

"Phyllida Lloyds superb staging proves that Gloriana was never intended as a pièce doccasion. Set in a high-walled joustingyard, which fills with fabulous pageantry and empties into a prison cell, it emerges as a deeply felt drama of the struggle between public responsibility and private yearning, as well as a moving exploration of the loneliness of those, like Britten, called to a high and hard destiny." (The Daily Telegraph)

"The sheer beauty and vitality of this score must surely have made anyone coming to it for the first time wonder how it could ever have been regarded as one of Brittens lesser achievements. The pageantry is fresh and free of pastiche, the lyrical passages are ravishingIn his coronation opera Britten was true to himself: he composed not a pageant but an opera of profound and Verdian insight into the heart and soul of a human being set in authority." (Opera)

"This 1999 production by Opera North, filmed for the BBC the following year, is a compelling and powerful one. Josephine Barstow's portrayal of Queen Elizabeth I could not be more magisterial and Tom Randle's Essex is hardly less convincing. A very strong cast with a strong sense of dramatic purpose and a first-class orchestral response under Paul Daniel." (The Penguin Guide)

"This is unquestionably among the finest opera films ever made. Phyllida Lloyd's Opera North staging vindicated this problematic piece..." (BBC Music Magazine)