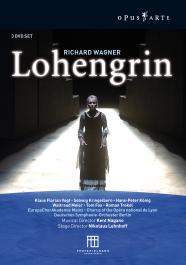 With powerful conviction, Nikolaus Lehnhoff interprets Wagner's Lohengrin as the dramatic struggle of masculine and feminine, revenge and compassion. Powerfully acted, almost like a Strindberg play, and musically of the highest order, this Lohengrin from the Festspielhaus in Baden-Baden will be a benchmark production for decades. With his extraordinarily transparent interpretation of the title role, Klaus Florian Vogt leads an inspired cast to visionary realms that are rarely touched, let alone captured on High Definition film and in pure surround sound. The monumental sets by Stephan Braunfels and Kent Nagano's sublimely well balanced musical interpretation complete a deeply moving total theatre experience.

"Whoever believes to already know all nuances ofLohengrin should go to Baden-Baden: soloists, chorus and orchestra are brilliant - and the production leaves barbed afterthoughts in your mind...There has not been aLohengrin like Klaus Florian Vogt, the young tenor fromHamburg, for many years...his voice is pure, clean,whiter than snow. Not of this world. Ideal for this role." (Frankfurter Algemeine)

"Thomas Grimm gets his cameras in close, leaving the singers to track reactions to solo utterances but missing some crucial interplay. Within a natural sound spectrum, some tweaking has been done to pull out solo lines in ensemble, but the emotions of Lehnhoff's vision ring true and will give pleasure." (Gramophone)

'Never Shalt Thou Ask of Me' - A documentary film by Reiner E. Moritz, including interviews with Nikolaus Lehnhoff, Stephan Braunfels, Bettina Walter, Kent Nagano and leading members of the cast.Illustrated Synopsis.Cast gallery.