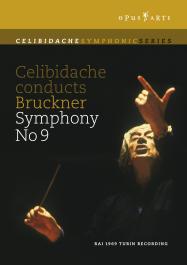 The conductor Sergiu Celibidache was a legend in his own lifetime, mesmerising orchestras with his intensity and brilliance, both in rehearsals and in performances - which were always conducted from memory. His own connection with Bruckner's last great symphony is powerfully evident in this performance. The Celibidache Symphonic Series celebrates the historic release on DVD of rare footage of the few performances ever recorded for television.Celibidache conducting Bruckners Symphony no. 9 inD Minor with the Orchestra Sinfonica di Torino della RAIin this 1969 Turin recording. RAI's historic black and white master is faithfully restored for this release, with digitally re-mastered 2-track mono.

"Sergiu Celibidache's Bruckner is often monumental.It is also revelatory in a way no other Bruckner conductorequals. Celibidache conducts these great symphonies as if he were King Lear himself, for in every bar of Bruckner's scores he scales heights of pathos and emotion most other conductors simply do not see in Bruckner's writing." (Musicweb International)

Includes 32-page booklet in three languages, with a newly-commissioned essay from Misha Donat on the genius of Celibidache.