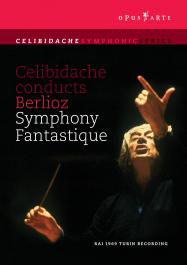 The conductor Sergiu Celibidache was a legend in his own lifetime, mesmerising orchestras with his intensity and brilliance, both in rehearsals and in performances which were always conducted from memory. In this recording, he takes on Berlioz's passionate autobiographical monument to obsessive and unrequited love. The Celibidache Symphonic Series celebrates the historic release on DVD of rare footage of the few performances ever recorded for television.Celibidache conducting Berliozs Symphoniefantastique with the Orchestra Sinfonica di Torinodella RAI in this 1969 Turin recording. RAI's historic black and white master is faithfully restored for this release, with digitally re-mastered 2-track mono.

"His intense, finely balanced and deeply felt interpretations made him one of the greatest names intwentieth century orchestral conducting. Above all, hewas a superb technician." (All Music Guide)

"1969 is long enough ago in the history of sound and vision to feel primitive compared to today's technology, but Opus Arte has buffed up this black-and-white Italian TV original to some purpose. As has Maestro Celibidache Turin's RAI orchestra, whose every section shows off the care of his characteristically detailed rehearsal. It translates into a reading whose tempi and dynamics have been tailored with the care of a wonderful listener to the band and the hall at hand...A stylish, detailed note by Misha Donat and sensitive work by RAI's camera director - following the score's high-points without indulging in visual ping-pong - add to the value of a release that promises to be the first of a series." (Gramophone)

"Those who recall the conductor's eccentricities in his later years will be surprised by the sobriety and dedication exhibited here. This is a very straightforward account of Berlioz's masterpiece and affords a valuable glimpse of Celibidache's fine muscianship. The camerawork is extremely discreet." (The Penguin Guide)

Includes 32-page booklet in three languages, with anewly-commissioned essay from Misha Donat on the genius of Celibidache.