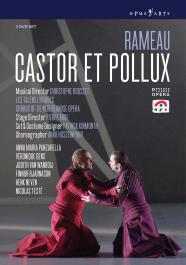 Castor et Pollux is arguably Rameau's finest creation in the tragédie lyrique style. Its libretto, based in mythology, focuses on an unusual theme: the self-sacrificing love between Castor, who is mortal, and his immortal brother, Pollux. When Castor is killed while defending his beloved Télaire from an attempted abduction, Pollux resolves to give up his immortality and take Castor's place in the Underworld. After passionate debate over who will live and who will die, the brothers are eternally united transformed into the constellation Gemini. The strikinglyluminous sets, depicting a stylized version of the constellation, give this fabulous production, staged by Pierre Audi and conducted by Christophe Rousset, a glorious 21st-century baroque look.

"To turn almost three hours of obscure French baroque opera into a popular hit is the kind of stunt at which the Netherlands Opera excels...All the singers are beautiful and polishedVeronique Gens as Phebe manages to rise beyond form and truly breathe life into her character'sphrases. Gens's performance is radiant and burnished, full of subtlety and character." (Bloomberg.com)

Documentary - 'To serve this big spectacle...'Illustrated Synopsis and Cast Gallery.