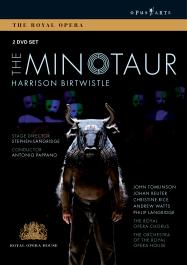 Birtwistle: The Minotaur (The Royal Opera)

This world premiere of a gripping new work by composer Harrison Birtwistle and librettist David Harsent, commissioned by The Royal Opera, brings the monstrous, Greek mythological character to the stage. John Tomlinson stars as the Minotaur, part man, part beast, trapped in his labyrinth and constrained by his bloodthirsty role there, longs to discover his true identity and his own voice. Athens must pay a blood sacrifice to Crete and among the innocents is Theseus, who has come to challenge the violent Minotaur, but who also attracts the attention of Ariadne, half-sister and keeper of the monster; it is with her help he succeeds. Antonio Pappano conducts the Orchestra and Chorus of the Royal Opera House.

"The impact of the opera is greatly heightened not just by the casting but by the staging by Stephen Langridge at the Royal Opera House Covent Garden, very well filled on this DVD, with simple yet vividly atmospheric designs by Alison Chitty. The role of The Minotaur as a sort of Jekyll and Hyde figure was expressly designed for John Tomlinson, the famed Wotan from Bayreuth and centrally cast too in Birtwistle's earlier Gawain. His voice may no longer be as steady as it was, but his singing could not be more moving." (The Penguin Guide)

"Thanks to a superb cast and impeccable playing under Antonio Pappano, the evening is a glittering success...what Birtwistle has done is give us one opera inside another. The outer one is strident and earthbound; theinner one - ending with the Minotaur's Caliban-like dying aria - burns with visionary fire." (The Independent)

"This opera, premiered at the Royal Opera last April, seems to me to be a masterpiece, of the kind that one feels the greatness of before one has a complete understanding of it...Christine Rice [as Ariadne], bearing the weight of exposition and of suffering, uses her wonderfully rich mezzo to stunning effect." (BBC Music Magazine)

"Birtwistle's latest large-scale music drama, written for Covent Garden, is a quite different experience on DVD: what might have been planned by composer and stage director to be witnessed from a distance is shown in unsparing close-up. But this seething, monumental reinvention of one of the most disquieting Greek myths  with a pithy libretto by David Harsent  is neither betrayed nor diminished by this excellent film." (Gramophone)