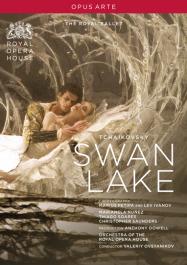 Yolanda Sonnabend's Faberge-inspired designs evoke a world of Imperial Russia in Anthony Dowell's acclaimed production for The Royal Ballet of one of the world's best-loved ballets. Marianela Nuñez as Odette/Odile and Thiago Soares as Prince Siegfried bring new vitality to a compelling story of tragic romance. The Russian conductor Valeriy Ovsyanikov directs the Orchestra of the Royal Opera House in Tchaikovsky's lush romantic score.

"Anthony Dowells production...offers the ultimate classical experience, with the sights and sounds of a proud 19th century tradition running at full throttle. Fancy a romantic tragedy in a tutu? Then this is the ballet for you...The production as a whole is beautifully formed and dramatically convincing...And praise, too, for the corps, who made us feel the sorrow and anger of the swans collective misfortune." (The Times)