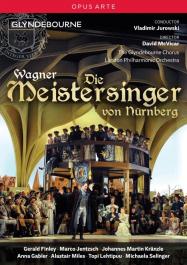 English-speaking audiences have always found Die Meistersinger to be a life-enhancing celebration of wisdom, art and song. So it proves in David McVicar's production - the first at Glyndebourne - which is updated to the early-19th century of Wagner's childhood. At the centre of a true ensemble cast is Gerald Finley, a 'gleamingly sung', 'eminently believable' Sachs (The Independent on Sunday), supported by the dynamic conducting of Vladimir Jurowski which, like McVicar's production, uses Glyndebourne's special intimacy to bring sharp focus to bear on the subtlety of Wagner's musical and dramatic counterpoint.

"McVicar has put on a great show with style, intelligence and insight." (The Daily Telegraph)

"Musically, it was judged faultlessly for the scale of the theatre by Vladimir Jurowski, who conjured playing of mercurial clarity - not the first words one would normally choose for this gargantuan score - from the London Philharmonic Orchestra, sustained with unfailingvigilance and concentration." (The Guardian)

"McVicar's staging stokes the glow of Meistersinger's humane heart...Together they make the immense performance the most uplifting performance I can recall." (BBC Music Magazine)

"Finley has the role of Hans Sachs massively in focus, both musically and dramatically." (Gramophone)