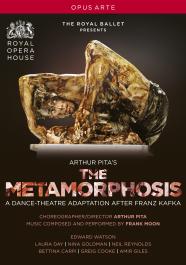 The Metamorphosis (The Royal Opera)

‘It’s unique and absurd … timeless and universal.’ So choreographer and director Arthur Pita describes Kafka’s powerful novella The Metamorphosis, which has inspired this award-winning production for The Royal Ballet. Principal dancer Edward Watson won critical acclaim for his ‘repellently brilliant’ (The Independent) portrayal of Gregor Samsa’s transformation into an insect, while the supporting cast vividly convey the conflicting reactions of Gregor’s family. Frank Moon’s dramatic score – performed live by the composer himself – and Simon Daw’s austere designs complement this disturbing and compelling reinterpretation of Kafka’s masterpiece.

"It is the remarkable quality of Edward Watson as a dancer that he can convey, with subtlest yet most penetrating effects, the inner life of those characters whom he portrays on stage. I have been fortunate to see every great male dancer of my time: such stars of the Ballets Russes as Massine, Lifar and Dolin, and leading danseurs of the companies in St Petersburg and Moscow and of western ballet during the past half century. None, with the exception of Nicolas Le Riche, has rivalled Watson in the ability to strip character of its externals and find the real man beneath the emotional subterfuges and the caparisons of social manners." (The Financial Times)

"... the evening belongs to Watson, confirming in this unique performance that when people search for the best British-born dancer working today, they can see him here." (The Daily Telegraph)

"... Watson delivers an astonishing performance... This tour de force is just one element in a brilliant collaboration where set design, lighting, music and choreography create an unforgettable portrait of an oppressive world..." (Dance International)