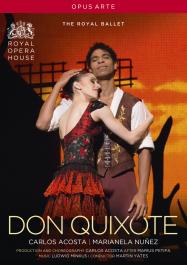 Carlos Acosta’s first venture directing one of ballet’s 19th century classics was eagerly anticipated, as was his own starring role in the production (as Basilio), opposite the Argentinian Royal Ballet principal Marianela Nuñez (Kitri). Packed cinemas for the live relay, as well as sold-out houses for his performances, testified to the draw the great Cuban dancer still exerts – and the audiences were not disappointed. Still built on Petipa’s original choreography, Acosta’s clear dramatic structure and vivid stage action gave the ‘boy gets girl despite her father’ story a more convincing air than usual, with Don Quixote’s parallel obsession with Dulcinea-Kitri coherently woven into the plot. Acosta’s and Nuñez’s performances were peerless, Tim Hatley’s stage designs vivid and apposite, and this production is surely destined to be a perennial Royal Ballet favourite.

"... when Acosta and Núñez, as the story’s sweethearts, start sparring, they manage a natural, coquettish rapport that’s quite irresistible, Acosta’s megawatt charisma balanced by Núñez’s fizzy, feisty, fan-wielding vigour. This translates seamlessly into their partner work and firecracker solos... Meanwhile, there are terrific supporting character performances from Gary Avis and Bennet Gartside, and a sharp and humorously turbo-machismo turn from Ryoichi Hirano as the toreador Espada." (Metro)

"What Acosta has principally aimed for is to clarify the narrative, find a more contemporary vibe for the characters and, above all, to rediscover the ballet's fun. In that, he has largely succeeded. He has stripped the mime of its most cod Spanish mannerisms and restored a credible sense of spontaneity to the acting. He has also made some small but liberating innovations. A new prologue – introducing the vision of Dulcinea – provides a more logical thread to the story, while the inclusion of live flamenco in the gypsy encampment brings a sense of outlaw fiesta to Basilia and Kitri's escapade. Acosta additionally makes lovely use of the tavern interior in Act III, with Kitri and the street dancer Mercedes facing off in a duet on the bar – a scene that is beautifully designed, with Tim Hatley mixing together a captivating palette of dark Spanish stone and vibrantly coloured costumes. He also has Marianela Nunez as his Kitri, whose triumph was not only to dance and flirt her way radiantly through first night nerves, but to find in Kitri a delicacy and detail that is often overlooked in the role's grandstanding technique." (The Guardian)

"... a jovial and entertaining showcase for classical dancing at its most demanding and exuberant. One of the pleasures of this ballet is to be tickled by Minkus's infectiously melodious score... Marianela Nuñez and Acosta delivered sparky, engaging performances." (The Times)

"But while this may be Acosta’s night, the show really belongs to his Kitri, Marianela Nuñez. A woman of sparky personality, teasing wit and steely technique, you can see why every man in the village is in love with her. The stage could have been a lot dimmer without her, but Nuñez brings bewitching warmth and down-to-earth humanity to this fantastical folly of a show." (Evening Standard ★★★★)

"Nuñez’s final variation in Act I was a thing of joy as she unleashed her inner ferocity and let rip. Acosta’s partnering, his care of Nuñez, was also a pleasure to watch ..." (theartsdesk.com)