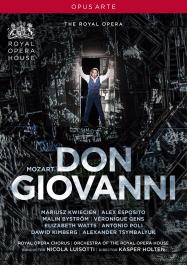 Mozart’s sublime tragic comedy offers boundless scope for directors, and Kasper Holten has chosen it to follow his directorial debut of Eugene Onegin. He wanted to shift the emphasis from Don Giovanni’s sex life into a darker place, showing Giovanni’s womanizing as an attempt to stave off his own mortality. Each woman he seduces represents a life he could have had. Though it is a dark piece, Holten handles it with a light touch and works with a superb cast – Mariusz Kwiecien, one of the world’s leading Don Giovannis, Alex Esposito, a fresh, vigorous Leporello and acclaimed French soprano Véronique Gens.

"Its [Kasper Holten's version of Mozart's Don Giovanni] virtues start with Es Devlin’s handsome set — a slowly revolving cube depicting the interior and exterior of a many-chambered plantation-style mansion — and Anja Vang Kragh’s imaginative costuming, which locates the period around 1840. Within this frame, Holten directs meticulously: the staging has been rehearsed with exceptional thoughtfulness and attention to detail. The pace is sure, and characterisations and relationships are sharply but subtly drawn." (The Daily Telegraph ★★★★)

"And in the Polish baritone Mariusz Kwiecien he’s [Kasper Holten] found the man for the job: when this Don appears on Donna Anna’s balcony, coolly adjusting his dress, he exudes such debonair attraction that the evident eagerness of Malin Bystrom’s Donna Anna is entirely believable ... the drama gains steadily in force thanks to the beauty of the singing, the charisma of Alex Esposito’s winningly clown-like Leporello, and the ingenious suggestiveness of Luke Halls’ video superimpositions on Es Devlin’s set. Dawid Kimberg’s Masetto makes an engaging counterpart to Watts’ earthy Zerlina, Gens puts her lyric-soprano gift to lovely use in her betrayal aria, and Bystrom’s glorious performance culminates in an aria (‘Crudele?’) of awesome power. Nicola Luisotti’s conducting may be a shade rough, but his fortepiano continuo is a nice touch." (The Independent)

"Kwiecien’s eloquently sung Giovanni heads a strong cast. Particularly impressive is Malin Byström’s Donna Anna, whose moving Non mi dir is addressed not to Don Ottavio but first to her dead father (via his bust) and then to Giovanni himself. Véronique Gens offers a sympathetic Donna Elvira, impassioned rather than hysterical in her inability to give up on Giovanni. Even in Leporello’s Catalogue Aria she embraces Giovanni, willing it not to be true. Alex Esposito’s resourceful Leporello also seems to be smitten by Giovanni, as is Elizabeth Watts’s lively, engaging Zerlina. Nicola Luisotti draws sensuous playing from the ROH orchestra, he and Paul Wingfield generating daring and witty dissonances in their keyboard continuo." (The Evening Standard ★★★★)

"The Danish director’s [Kasper Holten] new staging of what is regularly regarded as one of the trickiest of all repertory pieces to realise effectively is a genuine success. Visually this is a fascinating evening. Designer Es Devlin has come up with an endlessly adaptable structure of rooms, staircases and facades that swivels around seamlessly, conjuring an infinity of Escher-like spaces for the action to evolve in. Holten is lucky with his cast, led by Mariusz Kwiecien’s suave and sophisticated Giovanni, Malin Bystrom’s grand-scaled Donna Anna and Alex Esposito’s all-too-human Leporello. Also extremely worthwhile are Elizabeth Watt’s perky Zerlina, Dawid Kimberg’s easily manipulated Masetto and Antonio Poli’s sweet-toned Ottavio, while Alexander Tsymbalyuk makes a sonorous Commendatore. Conductor Nicola Luisotti is a flexible exponent of the score, ensuring that musical standards match the dramatic ones." (The Stage)

"[Kasper Holten] draws superb performances from the first-rate cast, and in Es Devlin's multi-faceted and flexible stage design – a plain façade opens up into a magician's box of secret panels and staircases – creates a world where eavesdropping, intrigue, pain and discovery can reverberate within a tightly controlled space. Aided and abetted by Luke Hall's video designs and Bruno Poet's lighting, Devlin's box of tricks comes alive to every nuance of the text and the score. It's certainly the most accomplished, lavish and ingenious use of video I've yet seen in an opera house. From the scrawling of women's names across the façade during the overture to the psychedelic mind-bending visual accompaniment to Giovanni's ‘Champagne aria', Hall's audacious designs thrill, enthral and actually add to, rather than diminish, the staging. Musically the performance was a delight from start to finish." (What's on Stage ★★★★)