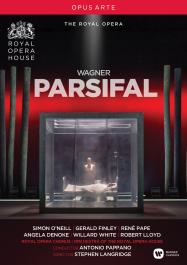 Wagner’s last opera Parsifal is a work of intense humanity. It narrates the story of a troubled community ultimately healed through one man’s realization of the power of compassion. Created in honour of the bicentenary of Wagner’s birth, Stephen Langridge’s new production, with designs by Alison Chitty, distils with ‘intellectual fibre and visual eloquence’ (Financial Times) the timeless and universal nature of the Parsifal story. The cast includes great Wagnerian tenor Simon O’Neill in the title role. René Pape as Gurnemanz is ‘immaculate’ (Guardian), Gerald Finley as Amfortas is ‘compelling’ (Telegraph) and Angela Denoke as Kundry is ‘dramatically electrifying’ (Telegraph). The Orchestra of the Royal Opera House under Royal Opera Music Director Antonio Pappano give a ravishing rendition of Wagner’s sublime score.

Filmed in High Definition and recorded in true Surround Sound

"... instead of ignoring or sidestepping the more unsavoury aspects of the libretto, Langridge does attempt to tackle many of them, sometimes in lurid detail, so that the disjunction between them and Wagner's sublime music is often disturbingly clear. There's no doubt of that sublimity in this performance either. Antonio Pappano's approach is both diaphanous and radiant, wrapping the vocal lines in veils of string tone and investing the brass statements with unshakeable authority... Vocally the standard is set by René Pape's immaculate, intense Gurnemanz, who makes every syllable in his narrations matter; O'Neill's shambling Parsifal, his tone slightly raw-edged, is perfectly suited to the production, while Finley manages to bring a dimension of nobility to Amfortas's sufferings, and Angela Denoke's tirelessly sung Kundry is the perfect mixture of the chilly and the unattainably seductive. Every one of them is a fully rounded, fully imagined character, and part of a totally involving, if sometimes problematic unity." (The Guardian)

"The triumph of this new interpretation, directed by Stephen Langridge and designed by Alison Chitty, is that it de-sanctifies Parsifal: all trace of pseudo-sacred mumbo-jumbo is removed. What we get instead is a visual shorthand, contemporary but timeless, that illuminates the opera’s philosophical complexity while keeping the narrative both straightforward and continually mesmerising. The bottom line is that Langridge has divined a Parsifal of intellectual fibre and visual eloquence, matched to a musical performance of exceptional sensitivity under Antonio Pappano. His is not a slow Parsifal, but a spacious, urgent reading with oodles of sensuousness in Act Two and disarming tenderness in the Good Friday music. Orchestra and chorus are on a high. The agony of Parsifal is personified by Gerald Finley’s Amfortas, a realisation of exceptional musico-dramatic size." (The Financial Times ★★★★★)

"Stephen Langridge's new production of Parsifal grapples intelligently with the big issues of this problematic work. What is the Grail? What is the nature of the redemption it offers? And what is the place of religion in all this? Antonio Pappano’s authoritative conducting draws out every drop of anguish and ecstasy from the score, with some unfashionably leisurely tempi as a result. His work with the singers undoubtedly helped René Pape to give one of his more verbally animated performances as Gurnemanz. Simon O’Neill delivered an engaging account of the title role, supported by highly impressive performances by Angela Denoke (Kundry), Gerald Finley (Amfortas) and Willard White (Klingsor)." (The Evening Standard)

"As music, though, this production is the stuff of wonder, prepared with immaculate and loving care by Mr. Pappano to the point where every detail is in place, secure, unsweated, and his focus can take in the longer view of Wagner’s sweeping architectural span. In generally good form these days, the Covent Garden orchestra excels itself with fine ensemble playing, and a fair approximation of the sonic halo that surrounds and integrates the textures when you hear them at Bayreuth. Which is to say, it feels authentic. Vocally the stars are René Pape whose Gurnemanz is easy, conversational but cavernously strong, and Gerald Finley as Amfortas. It’s Mr. Finley’s second Wagner role — he’s slipping gradually into the genre — and indicative of great potential: a complete performance, powerfully done." (New York Times)