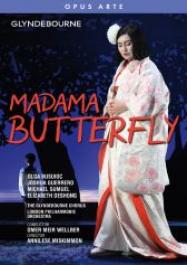 Annilese Miskommon's thought-provoking reading, lauded for its 'perception and clarity', updates the opera's setting to the 1950s, confronting the darker political and emotional currents of a work that acknowledges some barriers are too great for even love.

Guerroro endows Pinkerton with 'soaring, wilful, preening grace' and Puccini's score is 'sensuously and expertly played... under the eagerly responsive baton of Omer Meir Wellber' (The Guardian). DeShong gives Suzuki 'sanity and compassion, with a voice of superb authority' and the chorus is 'luminous in its humming serenade' (Telegraph ★★★★).

"…subtlety of detail combined with striking performances allows the drama fully to hit home." (The Guardian ★★★★)

"It's easy to get sucked into the sentimentality of Madama Butterfly. Puccini's luscious score, infused with Japanese pastel colours, showers the audience in orchestral cherry blossom and the story of Cio-Cio-San's blind devotion to the man who's abandoned her is a real tear-jerker. But the plot is deeply troubling and Annilese Miskimmon, in Glyndebourne Festival Opera's first production, doesn't pull her punches." (Bachtrack)

"At the heart of it is a very fine interpretation of the title-role by the Moldovan soprano Olga Busuioc..." (The Telegraph ★★★★)

"The key players mentioned in my header, Joshua Guerrero as Pinkerton, Carlo Bosi as Goro, Elizabeth DeShong as Suzuki, Michael Sumuel as Sharpless and Olga Busuioc as Butterfly herself, are all marvellous. It is unfair to pick any of them out, but I have to mention especially Michael Sumuel who reacts to every stage of this dreadful story with growing horror and concern. His is a heartbreakingly fine portrayal of a sensitive man unable to change the course of events which he knows spell doom for Cio-Cio-San." (Musicweb International)