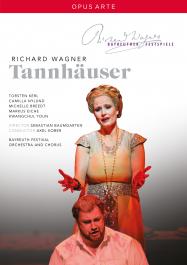 Wagner’s tale of the struggle between spiritual and profane love, and of redemption through love, is given a radical visual update in Sebastian Baumgarten’s controversial yet thought-provoking Bayreuth production. Joep van Lieshout’s giant installation ‘The Technocrat’ dominates the stage, its industrial interior giving credence to the idea that Tannhäuser is one big experiment and playing host to some magnificent performances, among them Torsten Kerl’s robust interpretation of the title role and Camilla Nylund’s wonderfully empathetic Elisabeth.

"Especially in the Singers' Contest in the second act the performers act with heart and soul. Baumgarten developed a truly animated stage direction. It is exemplary how Opus Arte uses the opportunity to show how opera DVDs can be equipped nowadays. The audio-track has a very good sound. The crystal-clear visuals cope well with the quick cuts which are necessary to convey Baumgarten's stage direction. Interviews and short films showcase the whole production beautifully. These extras communicate a great deal of Wagner's and Bayreuth's musical world. The DVD deserves the same enthusiastic applause as the artists in Bayreuth who were celebrated cordially by the audience." (Opernnetz)

"Kober’s conducting … is outstanding and the chorus are superb… The colour that Nylund is able to apply … pays dividends with Elisabeth … Kerl achieves a good balance between the more lyrical side of his character and the Romantic heldentenor … Musically it’s a glorious affair … that finds the true delicacy and poignancy within what is surely the most Romantic of Wagner’s works on the misunderstood, suffering, exiled artist." (Opera Journal)