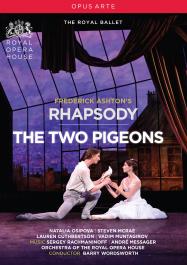 Two Frederick Ashton ballets in one exquisite evening performance. Principals Natalia Osipova and Steven McRae dance Ashton's Rhapsody, created for The Royal Ballet in 1980 by Mikhail Baryshnikov and Lesley Collier, with spectacular choreography to suit the dancers' star reputations.
Lauren Cuthbertson and Vadim Muntagirov lead a charismatic cast in Ashton's poignant and heart-warming reflection on Love, The Two Pigeons, based on an old French folk tale and first performed on Valentine's Day 1961. These two ballets by the Company's Founder Choreographer capture The Royal Ballet's famous skill and distinctive style. Barry Wordsworth conducts the Orchestra of the Royal Opera House in the rapturous Rachmaninoff and Messager scores.

"Watching the Frederick Ashton double bill now installed at Covent Garden, we see yet again how varied, how beguiling are Ashton’s dance ideas, how elegantly they wear their music, and how flattering they are to their interpreters. Steven McRae dances, blazing through steps, turning with an incandescent bravura, cutting tremendous shapes in the air, wrapping the score round himself, with Paganini (and Baryshnikov) evoked just as awestruck legend has told us. And thus Natalia Osipova, holding Ashton up to the light of her artistry that we may admire the facets and bright-cutting of her dances and his inventions, and moving with the delight in a role that marks her great gift." (Financial Times ★★★★★)

"How wonderful to see Rhapsody again, and how wonderful to welcome back Natalia Osipova, who hasn’t been seen on the Covent Garden stage in almost seven months. Our favourite Russian ballerina is nothing if not electrifying, and so she proves here making her debut in Ashton's hymn to the glory of pure dance." (The Times ★★★★)

"The ensuing competition between their solo variations is thrilling, not simply because of McRae’s soaringly athletic jump and Osipova’s skimming footwork, but because they dance all the little steps with such fierce, articulated detail. When the two dancers meet and melt into their central pas de deux, the lyricism of their suspended lifts, the lavish meshing of their bodies is all the more transcendent for having been hard won." (The Guardian ★★★★)

"Not only in close up, one-on-one partnerships, but Ashton can set a stageful of dancers going and you suddenly see Messager’s melodies and orchestrations come to life before your very eyes. That is more than mere choreography." (The Daily Express ★★★★)