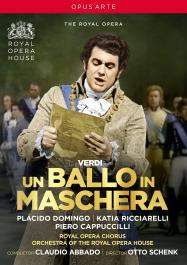 Illicit love, suspicion, deception andsupernatural portents of doom lead to a shocking drama at a masked ball in1790s Sweden. The incomparable Plácido Domingo stars as the dashing KingGustavus III, whose reforms have inspired talk of assassination among theconservative nobility. Katia Ricciarelli is Gustavus’s beloved Amelia, marriedto his closest friend, Anckarström, sung by Piero Cappuccilli. Claudio Abbadoconducts the distinguished cast, supported by the Orchestra of the Royal OperaHouse and Royal Opera Chorus, in Otto Schenk’s classic production of this Verdifavourite for The Royal Opera.

This recording, with English subtitles, ispreserved in its original Standard Definition and 4:3 picture format.

"Claudio Abbado is laser-focused with the Royal Opera Orchestra, making a strong argument for Verdi’s score as one of his most psychologically astute and dramatically nuanced." (Gramophone)

"Plácido Domingo brings sunshine and verve to the part of Gustavus, with a perpetual smile in his voice, not just in the laughing ensemble that brings Ulrica’s scene to an end. He never sounded better than he did at this point." (Musicweb International)