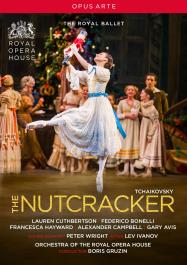 Tchaikovsky: The Nutcracker (The Royal Ballet)

​The Royal Ballet’s The Nutcracker is the quintessential Christmas ballet. When her nutcracker toy comes to life, young Clara istransported by the magician Drosselmeyer to a magical world ofexcitement and delight. Lauren Cuthbertson and Federico Bonelli dance the exquisite Sugar Plum Fairy and her Prince;Francesca Hayward and Alexander Campbell take the roles of Clara and the Nutcracker; and Gary Avis is the mysterious, kindly Drosselmeyer. This performance celebrated Peter Wright’s 90th birthday and a production that has been in The Royal Ballet’srepertory for more than thirty years. With sumptuous perioddesigns, spellbinding stage effects and of course Tchaikovsky’siconic score, The Nutcracker continues to enchant audiences ofall ages.

"fresh and reinvigorated - Nutcrackers come and Nutcrackers go but the Royal Ballet's version is a hardy perennial. Peter Wright's version of Lev Ivanov's original 1892 ballet has undergone changes since its debut in 1984 but it remains the one by which all others must be judged." (The Stage ★★★★★)

"The Royal Ballet’s production of The Nutcracker, always handsomely traditional, has become a tradition of its own. This revival comes up as bright as the gilding on the Christmas angel’s wings, from the charm of the party scene to the wide-eyed wonder of Francesca Hayward’s young heroine. This year’s performances celebrate the 90th birthday of its producer, Peter Wright. He’s tweaked this version several times since creating it in 1984, moving away from a recreation of the 1892 staging and adding more magic tricks and tweaks to the story. It unfolds with gracious warmth and sparkly detail. Hayward’s Clara is gorgeously spontaneous, always in the moment as she responds to the small dramas of the family Christmas and to the magic journey that whisks her away to the Kingdom of Sweets. Her dancing has a windblown lightness, with flowing line and nuanced musical phrasing. She’s matched by Alexander Campbell as the Nutcracker. Their duet has a delightful sense of discovery. It’s as if the soaring jumps were powered by their excitement at the new world they find themselves in. As the Sugar Plum Fairy, Lauren Cuthbertson shows a new polish, with elegant long limbs and neat feet. As her prince, Federico Bonelli is an attentive partner, and dances his solo with dash." (The Independent ★★★★)

"Opulently designed by Julia Trevelyan Oman, the Royal Ballet’s Nutcracker is a case in point. Unlike most versions, this has a satisfying narrative, building to a final scene of reconciliation that’s surprisingly moving. What’s more, where most Nutcrackers, during Act II’s globetrotting divertissements, tediously reduce the heroine Clara and her beau to passive spectators, Wright gets them very much involved: far more satisfying." (The Daily Telegraph ★★★★)