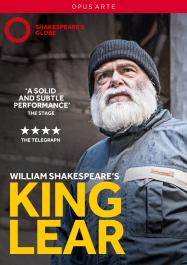 ​King Lear had three daughters, but no sons.

Boldly he makes a decision to divide his country among his children, but fails to anticipate the consequences of his actions. His generosity is cruelly repaid and Lear finds himself adrift, wandering homeless and destitute. As he comes to realize the false values by which he has lived, he finally encounters his own humanity/

King Lear's tempestuous poetry is shot through with touches of humour and moments of heart-rending simplicity, as the notion of familial love is questioned and torn apart.

With Kevin R McNally in the title role, Nancy Meckler's production has 'an underlying through-line of intelligence and sensitivity, and strong supporting performances abound' (The Telegraph)

"[McNally’s Lear] has an erratic physicality, revelling in his power and what remains of his virility but leaning on others – such as Loren O’Dair’s other worldly fool – whenever he can" (The Standard)

"Meckler is as wise as she is visionary" (WhatsOnStage)

"Meckler’s staging is clear, swift and compelling… It gathers to a moving finale, with McNally’s piteous Lear holding the stage, and delivers forcefully the lesson that power should always be allied with care" (The Financial Times)