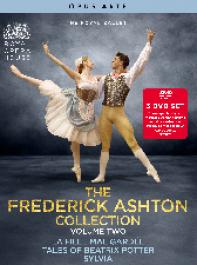 By contrast La fille mal gardée, starring Marianela Nuñez and Carlos Acosta, has been treasured as one of Ashton’s happiest creations – his artistic tribute to nature and his beloved Suffolk countryside.

The Tales of Beatrix Potter bring the famous stories of the English writer and illustrator to life in a warm and witty work for all ages. Swept up in the ballet’s childlike exuberance, the entire cast delivers outstanding portrayals of such colourful figures as Jemima Puddle-Duck, Mr Jeremy Fisher, Mrs Tiggy-Winkle and the irrepressible Peter Rabbit.

"[Darcey Bussell] dances with perfect precision in the pizzicato divertissement and is ravishingly radiant in the pas de deux powerfully partnered by Roberto Bolle who also displays some soaring elevation as the shepherd Aminta… It is gorgeous - do not miss it." (The Stage - Sylvia)

"Nuñez and Acosta are unsurpassable respectively in the feminine grace and masculine confidence of Ashton’s Lise and Colas, and their mimetic skills are delicious." (BBC Music Magazine ★★★★ - La fille mal gardée)

"Peter Rabbit’s beautiful and magical garden of dreams will transport every adult straight back to their childhood." (The Stage - Tales of Beatrix Potter)