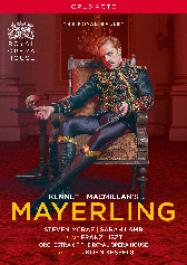 ​Mayerling is based on the true story of the deaths of Crown Prince Rudolf and his teenage mistress Mary Vetsera in 1889. This dark and intense ballet was created for The Royal Ballet in 1978 and is regarded by many as among Kenneth MacMillan's finest works. Orchestrated and arranged by John Lanchbery, the music of Franz Liszt sweeps the story to its intense conclusion, and sumptuous designs by Nicholas Georgiadis bring to life the formal, oppressive world of the Austro-Hungarian court.

The large-scale crowd and court scenes show the whole Company off at its dramatic finest. But it is MacMillan's choreography for Rudolf, one of the most technically and emotionally demanding roles in the repertory for male dancers, that makes this ballet so iconic. Rudolf's emotional decline is charted through daring and visceral pas de deux with his mother, his wife and Mary Vetsera - choreography that pushes classical ballet to its limits.

"The Royal Ballet season opens with a plunge into glittering darkness. Created for this company 40 years ago, Kenneth MacMillan’s Mayerling presents the steep decline of Crown Prince Rudolf of Austria, who died in a murder-suicide with his teenaged mistress, Mary Vetsera. The ballet is a stunning depiction of a repressed, repressive court, of lust and need and madness. Rudolf is one of the most demanding male roles in ballet, the heart of a long, complex drama. MacMillan traces Rudolf’s fall from his marriage to his death, with athletic duets with his wife, his mother and several mistresses." (The Independent ★★★★)

"Nicholas Georgiadis ’s brooding designs perfectly convey the claustrophobia and stifling protocol of the Austrian court, the orchestra under Koen Kessels give a plangent account of the Liszt score, and the company act up a storm." (The Observer)

"The opening moments of Kenneth MacMillan’s 1978 three-acter telling the true story of the murder-suicide of Crown Prince Rudolf of Austria and his teenage mistress are, in themselves, a neat piece of theatre. A pitch-black midnight and a small group of men surreptitiously bury a plain wooden coffin on a blank stage. What on Earth is going on? It all looks very shifty, but then we get a dose of shock value when the lights flash on a glittering, jewel-encrusted, Imperial Ballroom – Emperor and all. It’s a great piece of theatre and MacMillan’s dramatic skill has never been better. Nicholas Georgiadis’s opulent sets, from ballroom to bedrooms, bring a fairytale glamour to the stage while keeping it clear for what we are all there for – the dancing. John Lanchbery’s adaptation of Franz Liszt’s music is obviously made for dancing and the company as a whole looks terrific these days. The company dance as a body in the second act and prove there is more to dancing than learning the steps: being in the back row is as important as a solo. The Royal’s corps de ballet know how to dance these days, but their “look at me” instinct never takes over." (The Sunday Express ★★★★)