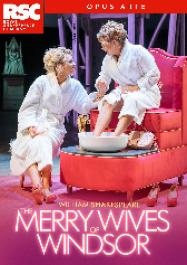 John Falstaff plans to hustle his way to a comfortable retirement by seducing the wives of two wealthy men. Unknown to him, it’s the women of Windsor who really pull the strings, orchestrating Falstaff’s comeuppance amidst a theatrical smorgasbord of petty rivalries, jealousies and overinflated egos. For a fat Englishman, a Welshman and a Frenchman, the only way is Windsor...

"The play has never felt so strongly feminist… The production is ablaze with energy and throngs with strong, quirky performances…" (The Independent ★★★★)

"The play bursts with slap(stick) and tickle, prats and pratfalls and lots of laughs — there is not a weak link in the cast." (The Times ★★★★)

"Troughton embraces the buffoon role with gusto, lumbering around the stage in public school Humpty Dumpty mode with a triangular rubber codpiece flapping in the breeze. But despite his good humour as an actor, the centrepiece performers are – rightly, given the trajectory of Shakespeare’s plot – the double act of Lacey and Cordingly.… It’s consciously very silly and in parts it succeeds at being funny…" (The Stage)