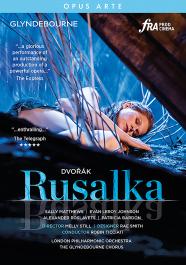 Praised by critics as “magnificent”, “breathtakingly theatrical” and full of “zestful imagination”, Melly Still’s “spine-tingling” Rusalka is a Glyndebourne classic – a magical contemporary reimagining of a much-loved fairy tale. Light and darkness, beauty and danger come together in this passionate tale of love against the odds.

At once evocative and unsettling, this production collides two contrasting worlds in Rae Smith’s elegant designs made of “brilliant stage-pictures”. Rusalka’s forest home is a dappled space of sunshine and shadows, full of strange woodland creatures, while the Prince’s court is a world of sleek modernity and sophistication – a world of man.

"Rusalka is wonderfully played and sung by British soprano Sally Matthews, who leads an excellent cast. With American tenor Evan LeRoy Johnson making a powerfully impressive Glyndebourne debut as the prince, Irish mezzo-soprano Patricia Bardon as a splendidly snarling Jezibaba, and Russian soprano Zoya Tsererina as the human princess who lures the prince away from his mermaid love, it all added up to a terrific cast, especially when one bears in mind that they were restricted to artistes who are fluent enough in Czech to cope with Dvorak's opera. Just as wonderful as the singing and acting were, however, these aspects were fully matched by Melly Still's stunningly beautiful production. On top of the glorious music and excellent singing and acting, this provides a magnificent visual treat. It is a glorious performance of an outstanding production of a powerful opera, and the final touch was provided by Robin Ticciati conducting the London Philharmonic Orchestra with great subtlety to bring out the best of Dvorak's music to show what a real treat this can be." (The Daily Express)

"Robin Ticciati conducted a reading of the score that was exquisitely light on its feet when playfulness was required but also rapturously deliquescent at the palpitating climaxes. The London Philharmonic Orchestra seemed inspired by his leadership: its playing was beyond ordinary praise. Sally Matthews has matured impressively over the last decade, shedding mannerisms and accruing both power and focus without loss of shine or flexibility. Singing what I believe was her first Rusalka, she gave her all and stretched her lyric soprano to the limits – early in the third act, I felt she was tiring and waning, but she rallied magnificently for the great final duet. ... enthralling ..." (The Daily Telegraph ★★★★★)

"Fantasy, romance, cruelty and even comedy are already in the libretto, but the staging adds whimsy, raunch, rock’n’roll, bloody brutality and, in the fairy-lit final moments, a touch of kitsch. Fortunately, Still draws strong characterisations from an excellent cast. Sally Matthews identifies with each phase of Rusalka’s development and suffering, and her voice, with its distinctive raw-silk texture, is especially impressive in her climactic outburst in Act II. Her Prince (looking astonishingly like Prince William) is the enormously promising young American Evan LeRoy Johnson, his tenor firm and often radiant. Slavonic bass Alexander Roslavets makes Vodnik’s intervention at the ill-fated wedding a highlight of the evening. Patricia Bardon, singing incisively, is chillingly pragmatic rather than grotesque as the witch Jezibaba, and Zoya Tsererina’s Foreign Princess projects powerful vocal and physical glamour. The three Wood Nymphs (Vuvo Mpofu, Anna Pennisi, Alyona Abramova) sound luscious. Though never over-indulgent, conductor Robin Ticciati relishes the score’s wealth of moods and beauty, illuminating instrumental and rhythmic subtleties, and the London Philharmonic Orchestra plays like a dream." (The Stage)

"Melly Still’s now ten year-old production rightly has no truck with the fay conventions of the romantic dream world, but, without denying the imagery, brings out the extreme menace, the coarseness and sometimes sheer nastiness that lurk just below the surface of what we’re pleased to call civilised life." (The Arts Desk)