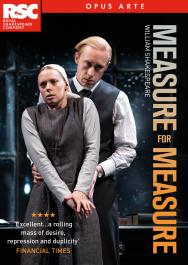 ‘TO WHOM SHOULD I COMPLAIN?’

When a young novice nun is compromised by a corrupt official, who offers to save her brother from execution in return for sex, she has no idea where to turn for help. When she threatens to expose him, he tells her that no one would believe her.

"Helmed by Royal Shakespeare Company artistic director Gregory Doran, this production is a Measure for Measure laden with powerful beats and clear, but uncomfortably loaded, images." (The Stage)

"Gregory Doran’s lucid compelling production....he has a way of making classical theatre excitingly simple and vivid...a luminous clarity. The city's bawds are an appealingly awful, well-tailored bunch, best of all a gorgeously lubricious Joseph Arkley as the dandyish but deadly Lucio" (The Times ★★★★)