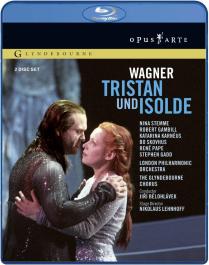 Glyndebourne's celebrated production of Nikolaus Lehnhoff's Tristan und Isolde is a supremely intelligent achievement; gravely beautiful, haunting and meditative, it is deeply reflective rather than visceral, fortified by Roland Aeschlimann's stunningly effective set, a womb-like space through which the protagonists move like gods. Conductor Jiří Bělohlávek mirrors Lehnhoff's approach in his sophisticated plumbing of the score's depths, with every shift in texture carefully laid bare by an inspired London Philharmonic Orchestra. Nina Stemme's Isolde and Robert Gambill's Tristan, both gloriously lyrical, are matched by superb performances from René Pape as the betrayed and vulnerable King Marke and Bo Skovhus as Kurwenal, deeply touching in his helpless devotion to Tristan. This High Definition recording of a production of uncommon intimacy reveals the opera's music and drama in a new light.

"I dont think that I have ever witnessed a more perfectrealisation of a Wagner opera than this superb Tristanund Isolde...[Ji?í B?lohlávek] is scrupulous with the score, and takes his time over it: the pauses and silences are immense and there is no factitious attempt to whip up excitement by speeding...a great and unforgettableoccasion." (The Daily Telegraph)

"A performance realised to Glyndebourne's highest standards  the chorus and stage brass are Bayreuthlevel, the casting immaculate (they can all really sing these parts), and B?lohlávek's conducting balanced with a Goodall-like attention to the filigree detail of Wagner's new-wave scoring." (Gramophone)

"...those looking for a Tristan with warmth and immediacy will find it certainly shares Barenboim's benchmark recommendation." (BBC Music Magazine)

Illustrated Synopsis and Cast gallery'Do I hear the light?' - a film by Reiner E. Moritz.Artist biographies.On the set - a slide show of the set being built.Trimborn on Tristan  a talk by Richard Trimborn.