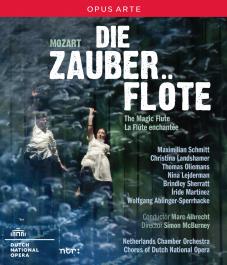 Since its premiere in a tiny suburban theatre in Vienna, Die Zauberflöte has delighted audiences young and old for over 200 years. Mozart’s Singspiel seamlessly alternates seriousness and jollity, and combines philosophical ideas with a fairytale world of wondrous animals and magical musical instruments. Emanuel Schikaneder’s original production was theatrically inventive, and this new interpretation from director Simon McBurney emulates that in fresh and current terms. Fusing music, technology and stagecraft, this exciting production gives Die Zauberflöte a refreshing new treatment that is both thrilling and simple in its approach. Following an overwhelming success on stage, McBurney’s unique production received five-star reviews in the Dutch press: ‘a feast for the eyes and the ears’ (Het Parool) and ‘Delicious!’ (Trouw).

"McBurney's set designer, Michael Levine, offers essentially an empty space, modern-dressed by Nicky Gillibrand, atmospherically lit by Jean Kalman, and filled with magical video images by Finn Ross, who conjures […] perhaps the most effective trials by fire and water I have ever seen (in the latter, Pamina and Tamino appear to float, submerged, thanks to Ross's film work and old-fashioned theatre-flying techniques). Schikaneder, great showman-impresario that he was, would surely have approved. [...] it effortlessly shifts between knockabout comedy and high-falutin' philosophy, and moves out of darkness into light in the surest of directorial hands. In Amsterdam, McBurney had a like-minded collaborator in the [Netherlands Opera’s] mercurial new music director, Marc Albrecht […] who conjured magic from the Netherlands Chamber Orchestra (led by the LSO's Gordan Nikolitch)." (The Sunday Times)

"McBurney’s designer, Michael Levine, offers an empty box which he fills with magic tricks, aided and abetted by the contemporary costumes of Nicky Gillibrand, Jean Kalman’s beautiful and theatrical lighting, and marvellous film-work by Finn Ross. […] And the production team has surely devised one of the most successful realizations of the problematic fire and water trials ever seen […] Marc Albrecht’s fleet baton drew wondrous woodwind solos from the Netherlands Chamber Orchestra […] DNO is lucky to have a chief conductor who is clearly as fine a Mozartian as he is a Wagnerian and Straussian. […] The vocal stars were Thomas Oliemans’s wonderfully engaging Papageno and Wolfgang Ablinger-Sperrhacke’s spiteful Monostatos." (Opera)

"Amid the darkness in this rich, inventive production there were, too, moments of startling humour and theatrical wizardry." (The Guardian)

"There are magical moments in McBurney’s production, some of them as funny as Mozart intended." (The Evening Standard)