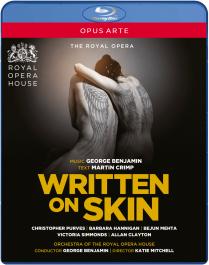 When Written on Skin had its premiere at the 2012 Festival d'Aix-en-Provence, conducted by George Benjamin himself, it received a standing ovation. The opera's arrival at Covent Garden in 2013 was eagerly anticipated, and provided audiences with the opportunity to experience the work of two of Britain's greatest living artists. Benjamin previously collaborated with playwright Martin Crimp on Into the Little Hill, a magical retelling of the Pied Piper fairytale, and for this new work they joined forces with acclaimed stage director Katie Mitchell. For all three, the production marked their main-stage debut at the Royal Opera House. The tale, inspired by a medieval legend, tells of an ill-fated troubadour, drawn into a liaison with an innocent maiden. But they are observed by the jealous eye of her protector, who wreaks a shocking revenge on the young couple.

"Magic and irresistible ... It is the best opera written over the last twenty years." (Le Monde)

"Written on Skin is close to being a masterpiece." (Le Figaro)

"Would the opera work so well without a Protector as adept at portraying cruel, complex characters as baritone Christopher Purves, or a soprano combining fierce presence with such pure tone as Barbara Hannigan, or a countertenor Boy sounding as beguiling and other-worldly as Bejun Mehta? Perhaps not quite. But it would still be a musical masterpiece." (The Guardian)

"This is music of genius. It also draws superb performances from a flawless cast: Christopher Purves (the castellan), Barbara Hannigan (his wife), Bejun Mehta (the artist), and Allan Clayton and Victoria Simmonds as the choric angels, who seem to instigate as well as observe the action. Benjamin’s conducting of his own music was literally authoritative, and the orchestral playing was ravishing. After a long run of mediocrity at the Royal Opera, what joy to encounter something as enthralling and enchanting as this." (The Daily Telegraph)

"Hailled as a 'triumph' at its premiere in Aix-en-Provence in 2012, 'Written on Skin' has quickly establsihed itself as one of the essential 21st-century operas." (Gramphone - Winner of the Contemporary Award - Gramophone Awards 2014)